Here is some sound advice taken from the Opus Dei website on making the best use of your time if you are currently quarantined:

In recent weeks, the advance of COVID-19 has led many regions of the world to take measures to try to curb the number of infections and avoid saturating health systems. Whether you are in a hospital bed, in self-isolation at home by quarantine or for prevention, teleworking from home or “tele-schooling”, caring for children or grandchildren, or facing economic uncertainty, it is easy to become pessimistic and anxious, or even obsessive about knowing the latest updates.

Nevertheless, this time of apparent inaction is also an opportunity to live out one’s civic duties with responsibility, make good use of one’s time and be united in solidarity to those who are more seriously affected through prayer, keeping in mind healthcare workers, government officials, and other people and institutions that are working hard to reverse the situation.

As an institution within the Church, Opus Dei seeks to help ordinary people find God in their daily circumstances: work, family, friendship… The situation we are experiencing is not exactly ordinary or habitual, but Saint Josemaría taught us to see God’s loving hand behind everything, because even tragedies can bring about something good. 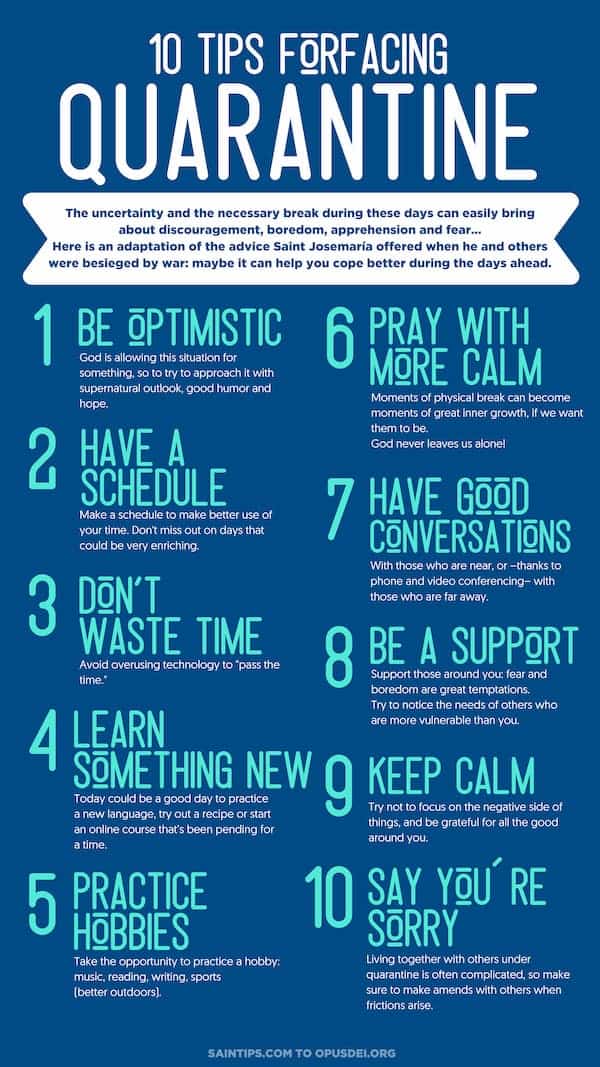 In April 1937, Saint Josemaría went through a similar experience of isolation, although it was even more dramatic. With the outbreak of the Spanish Civil War, he was forced to take refuge in the Legation of Honduras in Madrid. He stayed in that house with this brother Santiago and four young members of Opus Dei for four long months, sharing a single bathroom and several mats spread over very few square metres, and almost a hundred people…

One of those present, Eduardo Alastrué, describes the atmosphere: “Some people spent the time ruminating silently about their discouragement and misery; others sought relief in commenting bitterly on both present and past experiences; others lamented incessantly about their family problems, their lost careers or businesses, or their uncertain and threatened futures. These feelings were mixed with the fear aroused by past suffering and persecution, fear that made the world outside our asylum seem completely uninhabitable. In some cases, hatred of adversaries was connected to this fear, hatred that couldn’t be acted on for the moment, but which hoped to satisfy itself one day in a rematch.”

In contrast, the atmosphere that Saint Josemaría created around himself was positive and hopeful. To keep the day well occupied, he established a schedule that included moments for talking with God, study, learning languages and spending time together as a family.

“My life is so monotonous now!” remarked St. Josemaría during a meditation preached in July to those who were with him during those days. “How can I bring God’s gifts to fruition in this forced retreat? Don’t forget that you can be like a snow-capped volcano (…). On the outside, yes, the ice of monotony and darkness might cover you; outwardly you appear trapped. But inside, the fire will not stop burning within you, nor will you tire of making up for your lack of external action with a very intense internal one…”

And in a letter written a year later to those of Opus Dei who were dispersed throughout Spain by the conflict, he suggested another way to do it: by taking care of one’s “interior life”.

In his book The Way, St Josemaría described this experience in what he writes in point 294:

“The plants lay hidden under the snow. And the farmer, the owner of the land, observed with satisfaction: ‘Now they are growing on the inside.’

I thought of you: of your forced inactivity… Tell me: are you too growing ‘on the inside’?”